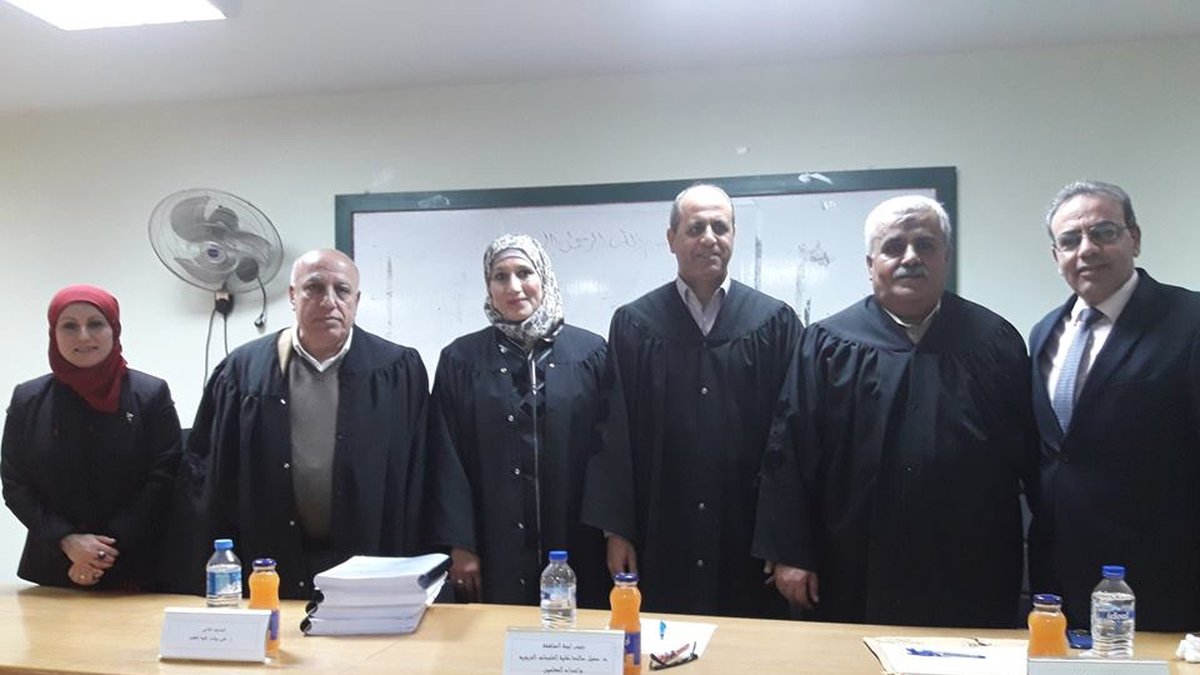 The Faculty of Graduate Studies awarded the researcher Neda Hamdan a Master’s Degree in Methods of Teaching Mathematics in response to her thesis entitled “The Effect of Using Math Xpert Program in Mathematics’ Achievement and the Level of Mathematics Anxiety in Basic Ninth Grade Students in Public Schools inTulkarem”.
The researcher conducted an experiment on sample of (64) female students of the ninth grade in the Omar bin Abdul Aziz Secondary School in Tulkarm governorate, which was deliberately selected from the ninth-class community, In the year 2017/2018. The sample was divided into two groups: control and experimental. The former studied the real numbers unit in the mathematics textbook, using the traditional method of learning. The latter group studied the same unit, using Math X-pert Program. The study experiment was conducted in the first semester of 2017-2018.
To collect data for the study, the researcher applied two instruments to the sample of the study. The first instrument was the anxiety scale of mathematics, where the measures of anxiety were used in different studies, including Al-Abed and Saleh (2014). It was presented to a group of arbitrators and the necessary adjustment was made to fit the target group and its purpose. Hence, 0.893).
The second instrument was the post-achievement test to measure the level of achievement of students in the experimental and control groups after the completion of the education of the unit of real numbers, and was presented to a group of arbitrators to verify its validity, and calculating the coefficient of stability was (0.934).
The collected data were processed using One-way Anova and Pearson Correlation Coefficient. After data analysis, it was found that:
1. There was a statistically significant difference at the level of significance (= 0.05α) between the average achievement of students in the control and experimental group in mathematics, due to the method of teaching (normal, using Math x-pert Program).
2. There was a statistically significant difference at the level of significance (= 0.05α) between the average level of mathematical anxiety in the control and experimental group in the learning of mathematics, due to the teaching method (normal, Math x-pert Program).
3. There is a statistically significant relationship at the level of significance (α = 0.05) between scholastic achievement in mathematics and the degree of anxiety among students.
In light of these results, a number of recommendations were recommended: To take advantage of the results of this study and to invite those who are responsible for the educational process to support the schools with computer labs and the provision of computer educational software in mathematics for all ages, especially Math X-pert, Mathematics for students and reducing the degree of anxiety of their mathematics, in addition to the need to hold training courses for teachers of mathematics in the use of computerized educational software in the teaching of mathematics, and the preparation of manuals for teachers, including instructions for the use of computer programs, Math X-pert software.
The committee consisted of: Dr. Suheil Salha as a main supervisor and Chairman, Dr. Ali Brakat as a second supervisor, Dr. Rafa Ramahi as an external examiner and Dr. Ali Zuhdi as an internal examiner.
At the end of the session, the committee approved the success of the researcher and recommended her a Master’s degree.