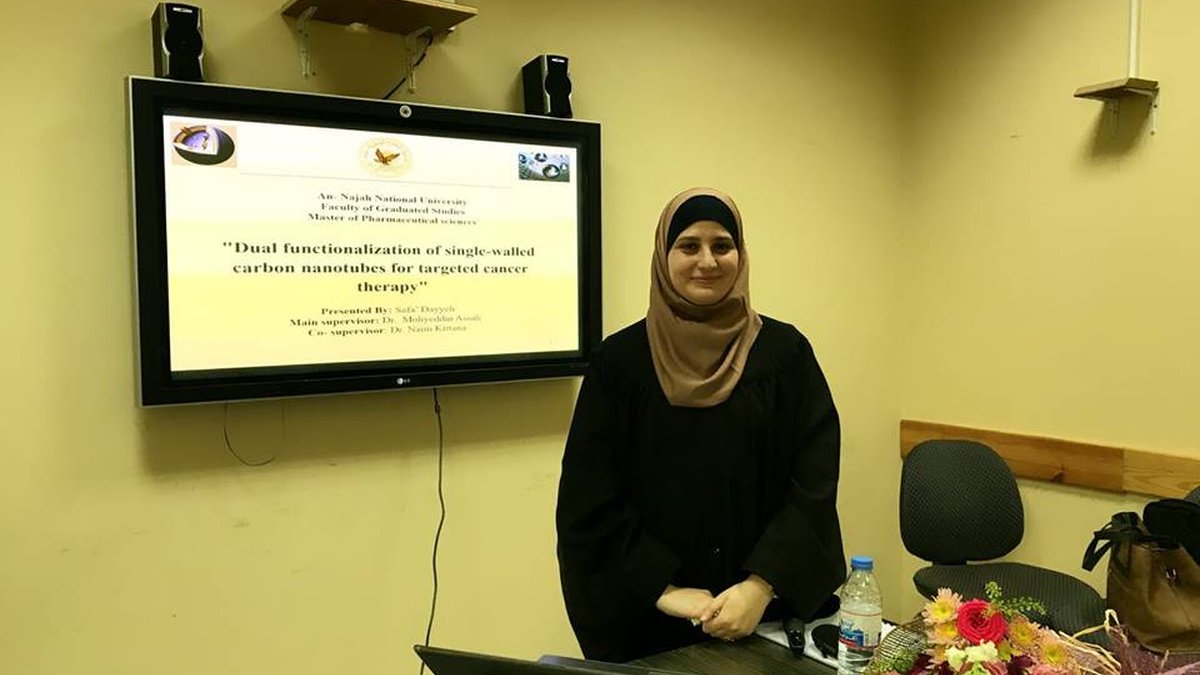 The Faculty of Graduate Studies awarded the researcher Safa Dayyeh a Master’s Degree in Pharmaceutical Sciences in response to her thesis entitled “Dual functionalization of single-walled carbon nanotubes for targeted cancer therapy”.

Chemotherapy is a mainstay strategy in the management of cancer. Regrettably, they suffer from serious side effects due to their effect on healthy cells besides cancerous cells. Therefore, many researchers are eager to develop new drug delivery systems that may help to decrease the side effects and the effective dose of the drug in addition to target delivery of the chemotherapy to cancer cells. One of the epochal drug delivery systems in this field are based on carbon nanotubes technology.

The cytotoxity effect of the compounds was studied at different concentrations and different pH conditions and compared with Dox alone. The maximum cytotoxity effect was observed at 4μg/ml and at pH 6.5. After that, the pre-incubation with any of the tested concentrations of mannose reduced the cytotoxicity of Dox-mannose-SWCNT by approximately 40-57%, suggesting that the entry of this complex might be dependent on mannose receptors, which imparts this complex a kind of selectivity for cancer cells that overexpress this type of receptors.

The committee consisted of: Dr. Mohyeddin Assali as a main supervisor and Chairman, Dr. Naim Kittana as a second supervisor, Dr. Numan Malkeyeh as an external examiner and Dr. Murad Abu Al-Hasan as an internal examiner.