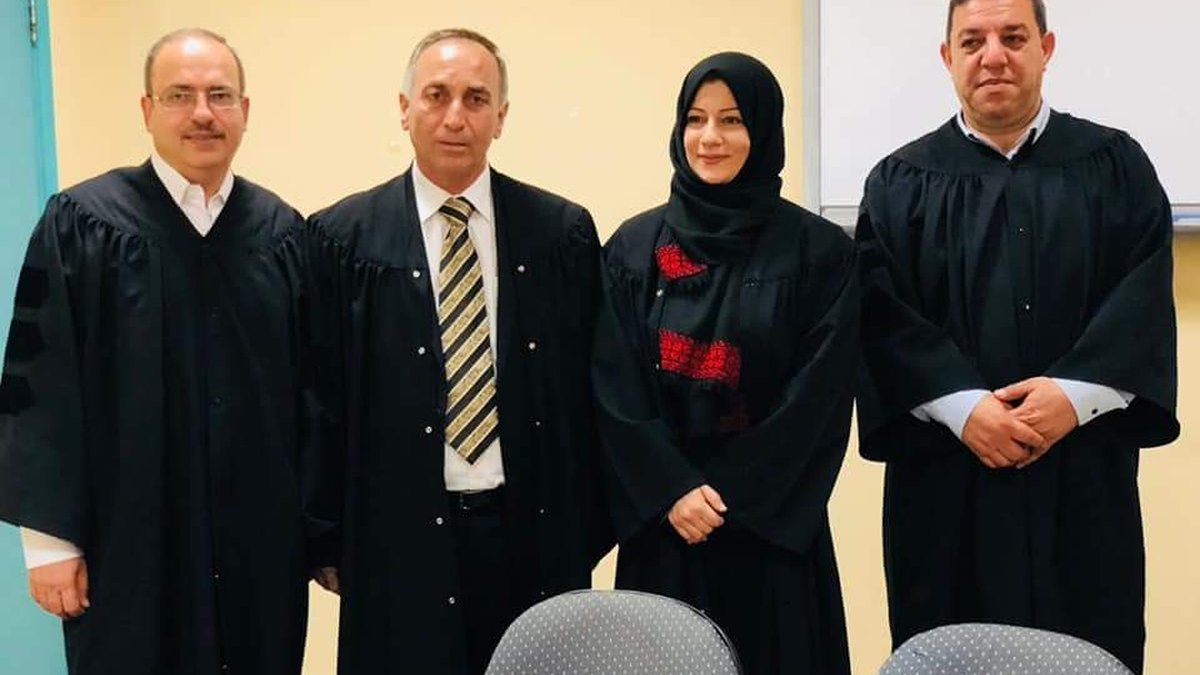 The Faculty of Graduate Studies awarded the researcher Obayda Abdel-Hadi Mara’beh a Master’s Degree in Engineering Management in response to her thesis entitled “Major Obstacles Facing the implementation of Build-Operate-Transfer (BOT) Model in Palestinian Infrastructure-Water and Electricity sector”.

The study aimed to identify the obstacles facing the implementation of BOT model in the Palestinian infrastructure visa vie water and electricity sectors.

The study attempted to answer its main question: What are the legal, administrative, financial, political, social and technical obstacles that impede the implementation of the BOT model in the Palestinian infrastructure, in the water and energy sector? Each obstacle was addressed in a set of sub-questions in order to answer the main question of the study.

The study community comprised (668) individuals, (208) government officials and (460) businessmen classified (A)where the targeted sample included (430), 230 businessmen and 200government officials in the Water and Energy Authority, where (376) questionnaire were valid for analysis. The study sample was selected to cover all government officials in the Water and Energy Authority and 50% of the businessmen. Data analysis was implemented using SPSS after coding the questionnaire. The results of the descriptive analysis were expressed using weighted percentages and arithmetic averages, T test, one way Anova, and Cronbach's - Alph (Internal consistency).After statistical figures appearing in the charts, the data was analyzed theoretically by making use of the literature review.

The results indicated that the impact level of all six categories of obstacles were high with a mean of 3.815 and an arithmetic average of 3.70 to 3.97. The response level was high for all categories. Political obstacles are the most influential factors with a mean 3.97. The political obstacles were the highest rated obstacles, which limit the application of BOT (control of the Israeli side over large areas of area C with a mean of 4.29). In other words, the military orders, controls and instructions of the military government regarding the use of the Palestinian infrastructure with a mean of 4.195. The intervention of political trends in the implementation of BOT projects with a mean 4.11). 55 phrases were at a high level in terms of their impact, while only one statement rated the level of effect at an average (the possibility of subsequent governments denying the obligations of the previous government with a mean 3.32).

The Study recommended the following:

Recommendation for the Public Sector (The Government)

The researcher recommended the establishment of a special unit in the pri ministries office to deal with BOT strategy adoption. This unit should be responsible for coordinating BOT strategy adoption in project with the various ministers. Add to this, setting out a legal framework to adopt BOT strategy that will lead to build partnership and dine the rules and procedures that govern this strategy in order to attract investors to participate in this strategy. The government must develop a BOT guide that deals with all the details and specifications of BOT strategies and learn from the experience of other countries in preparing such a guide. The study also recommended promoting the culture of partnership through conducting workshops, trainings and conferences advocacy campaigns. This can be achieved through dialogue with the various sectors that are qualified to join such partnerships as the BOT and showing the benefits that can be achieved. Chambers of commerce plays an important role in highlighting the importance of BOT Strategy through conducting workshops that aim at reflecting to the private sector the concept of BOT strategy and the special contracts that govern it. The government has to encourage the financial institutions to adopt a vision related to funding BOT projects where the government ensures the rights of investors. The researcher stressed the importance to engage the private sector representatives in the final status negotiations to express their interests and needs that will affect the peace process. Finally enhance and improve communication between the two sectors (private and public) when implementing BOT projects through activating the role of the coordinating council and introducing new partners from the water and electricity sector.

Recommendation for the Private Sector

The private sector, represented by the Coordination Council, opens channels of communication with the relevant ministries, through which it presents the capacities and potential of the private sector in addition to the financial and human resources necessary to enter into partnerships of this kind and based on the BOT model. In addition, it opens channels of communication with the Monetary Authority, local and national banks in order to reach joint financial approaches to fund  BOT projects and these approaches ensures the rights of all relevant  stakeholders. The researcher also calls upon the private sector to initiate partnerships to implement BOT projects and construct the suitable and sound infrastructure for these projects to coordinate with special unit in Pri ministries to submit a holistic applicable vision for these projects based on the Arabic experience in this domain thus urging the public sector to adopt this strategy. This holistic vision should clarify all the possibilities and potentials of the private sector and consequently qualify it to implement such projects.

Finally, the study recommended that future studies on BOT projects include the finance sector such as banks, financial institutions and the community (the end user) and aim to identify the obstacles facing the financial institutions in funding infrastructure projects within the BOT projects. The researcher built a model based on the results of the study aims to overcome the obstacles of implementing the BOT project in the Palestinian infrastructure which include:  the sectors of water networks and power stations. Moreover, studying the inputs, outputs and the results of implementing this strategy with respect to the Palestinian situation.

The committee consisted of: Dr. Abdel Fattah Shamleh as a main supervisor and Chairman, Dr. Salah Sabri as a second supervisor, Dr. Suheil Sultan as an external examiner and Dr. Ahmad Ramahi as an internal examiner.