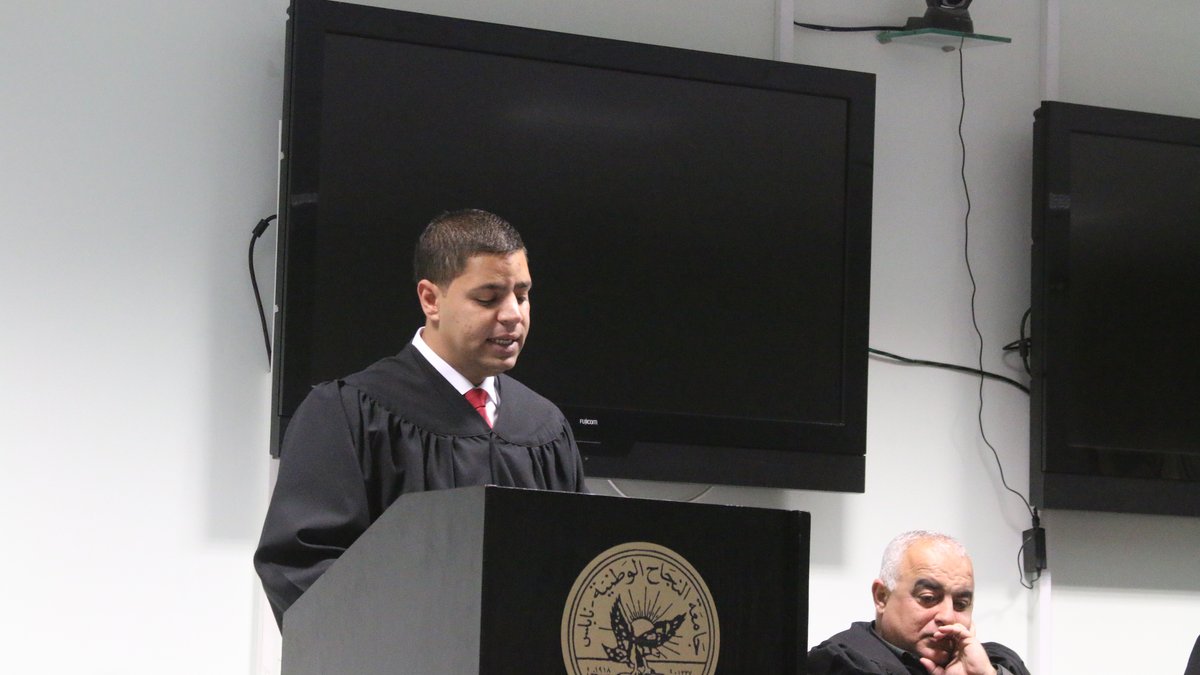 The Faculty of Graduate Studies awarded the researcher Amjad Bushkar a Master’s Degree in Planning & Political Development in response to his thesis entitled “Political Partnership for Islamic Political Movement/ Study of Hamas Case”.
This study aims to underpin the obstacles that Islamic Political Movements have faced in the realm of political partnership, and their ability to prioritize their political agenda at the expense of social goals in order to produce political partnership in the Arab world.
The question around which the research revolves is the possibility and willingness of Islamic Political Movements to engage within a framework of political partnership. However, this engagement is not friction-free endeavor. Therefore, we examine the main hindrances to this endeavorwhether they were intellectual or behavioral. Hamas movement represents the model that we take as a case. This selection is justified by the facts that Hamas is a leading force within Islamic Political Movements in the region, and that it is a peculiar case in terms of its relationship with other Palestinian factions and movements on the middleand opposite end of the political spectrum.
In order to grasp the core of the subject we claim that Islamic Movement have faced serious hindrances in functioning as a governing power, and obstacles to engage political partnership. Both hindrances stem from policies of exclusion and marginalization carried on by Arab regimes. This l was entrenched following Arab Spring upheavals and the victories Islamic Movements gained in general elections in a number of countries. As aresult ,these movements became, engaged intellectually and behaviorally ,in entertaining new obstacles to partnership including the nature of the state, the formation of the Umma, elections and institutional building.
Methodologically the study rests on case study analysis through which political partnership is examined in a broad sense and then in particular for Hamas. The main tool of research was interviews in addition to archival reviews and primary resources.
The study is lied over three major chapters: the first discussed the state in both Western and Arab thinking in order to show the deep differences between them in terms of the nature of the state, and the manner in which states are institutionalized. We show that the state in the Arab experience does not offer a conducive context for political partnership. Nor it provide necessary conditions for partnership. The second examines Islamic Political Movements to characterize their behavior and intellectual underpinnings pertaining to political partnership. In addition, the third discusses Hamas and political partnership.
Main conclusions of the research highlight the fact that political partnership is one of the most blatant problems that faces Arab political movements. This phenomenon is the result of historical experiences in which a number of subjective and objective factors intertwined in such a way to yield political disagreements. The discussion of political partnership lends itself to the question of social contract upon which states and societies in the Arab world are to rest. Islamic political movements represent an inseparable part of the social fabric in the Arab countries. However, they were marginalizedand alienated the state. Alienation compelled Islamic Political Movements to establish what we can call Deep Societiesin order to counterbalance the Deep Stateof military institutions and liberal forces.
By adapting and declaring the Document on Principles and Policies ,Hamashas created a state of affairs that ley the ground for establishing a genuine political partnership. Hamashas put forth answers to many issues that prevented political partnership in the past among them the question of the Palestinian state, the position on the P.L.O, resistance, in addition to issues pertaining to: the national aspect of Hamas, democracy, women, and the Palestinian other.
The committee consisted of: Dr. Raed Nerat as a main supervisor and Chairman, Prof. Ayman Talal as an external examiner and Dr. Naser AL-Deen Shaer as an internal examiner.
At the end of the session, the committee approved the success of the researcher and recommended him a Master’s degree.