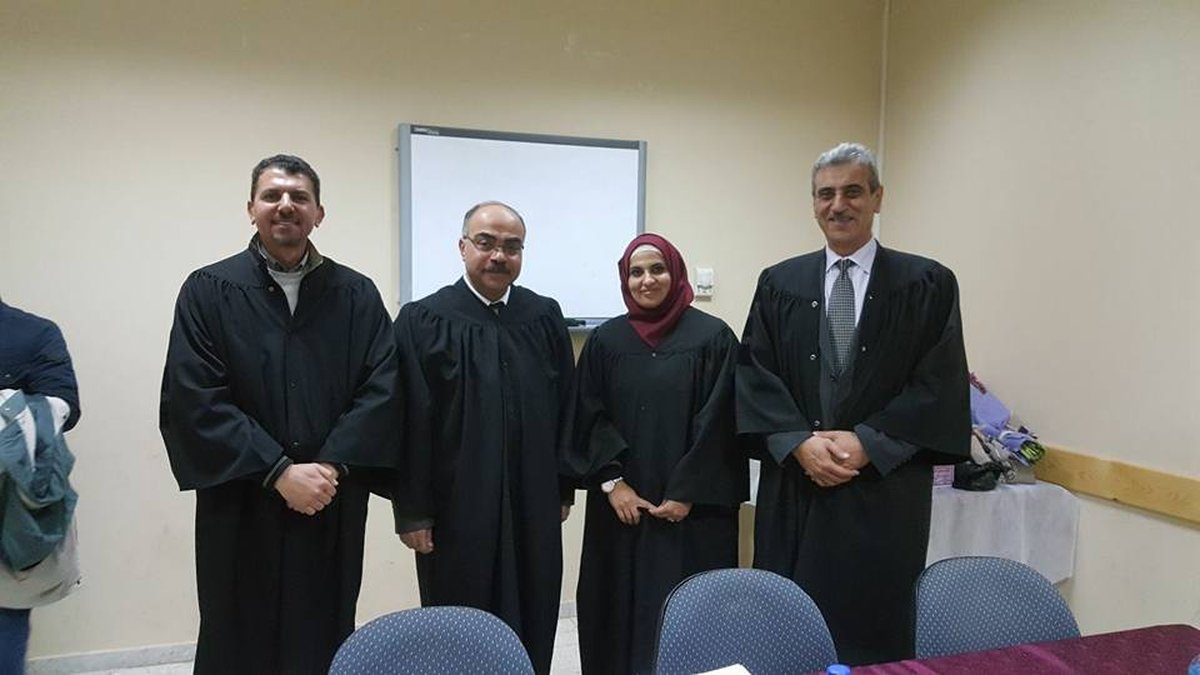 The Faculty of Graduate Studies awarded the researcher Alaa Ellayan a Master’s Degree in Urban & Regional Planning in response to her thesis entitled “Study of Inter Cities Public Transportation Services and Coverage in the West Bank”.
All developed countries in the world have a great interest in Public transport (PT), their development, and evaluation as it is one of the basis of success for that nation.
In the WB, the PT is generally neglected and worn out. There is no periodic study about the quality of the services provided and the passengers’ satisfaction and their needs. Despite of large number of daily passengers and 45% of them travel daily for study, work, or other purposes, only 19% of them use buses because of their lack of confidence in the service and 80% because of the old fleet. Therefore, it is an inconvenient mode. About 75% of the passengers are male and 60% are under the age of 30 years.
The bus service is owned and operated by private companies and there are no clear procedures for adding new routes or buses by MOT.
In order to improve the current situation, in addition to MOTs’ strategy to implement an integrated bus transport system to reduce traffic congestion and pollution, this evaluation study aims to investigate the main imbalance in the current bus service by focusing on bus terminals and level of service (LOS) that includes coverage, reliability, and efficiency.
The required data were collected through field survey of bus terminals in the WB governorates except Jerusalem. Statistical data were collected from the relevant official authorities or previous projects and studies, interviews with service providers, and a questionnaire to measure the satisfaction of passengers about bus service for 22 bus lines.
All terminals don’t meet the standards of MOT and most of them don’t meet the minimum requirements for passengers and people with special needs.
There is no harmony between supply and demand, and there is a lack of balance for the current system between buses and shared taxis as the number of buses is only 6% of the number of shared taxis. In addition, 96% of the existing buses are old (less than 2010), which is a reason why many passengers are reluctant to use them. In addition to the long journey time, approximately (30-50) % of the flight time is delay due to use of buses, and service is not available all the time.
Seven routes out of 22 have relatively good productivity in terms of the number of daily passengers, the number of trips, and the traveled distances. The rest of the routes are considered nonproductive because of either the large number of buses or the small number of passengers.
All governorates of the WB have good coverage by PT, but there are no official loading/unloading stations between the cities. There is no direct connection between some cities except through other routes such as Tulkarm-Hebron. Some routes such as Tulkarm-Ramallah passes through towns such as Anabta and Huwara, which increases the flight time because of existing congestion and low travel speeds in these areas.
Approximately 2% of the annual accidents involved buses, which is high as the percentage of buses is only 0.1% of the total number of vehicles.
Finally, in order to develop the transport sector, it is necessary to work on developing bus terminals and providing official loading stations between cities with designated timetables.
The government should support this sector. Efforts should be combined between the competent bodies, such as the formation of a road authority, to conduct periodic studies on the needs, assess the situation, and make appropriate recommendations to increase the productivity.
Passenger trust on buses should be revamped by modernizing the fleet, reducing bus allowance for only 10 years instead of 20, adopting a regular schedule, providing a smart service system, and providing services at all times where demand is available.
The government's priorities should be to connect all the cities with an integrated and continuous network away from traffic congestion. A rapid bus line should be provided with special paths only for buses, as well as providing train services, in addition to restricting some roads within the city centers and allowing buses only at peak demand.
It is essential to carry out periodic studies for this sector, collect statistical information, and evaluate the satisfaction of passengers and their needs to strike a balance between supply and demand.
Future studies should include Gaza Strip and shared taxi services to get a complete picture of the PT services in Palestine
The committee consisted of: Dr. Khaled Sahili as a main supervisor and Chairman, Dr. Ali Shaath as an external examiner and Dr. Imad Dawas as an internal examiner.
At the end of the session, the committee approved the success of the researcher and recommended her a Master’s degree.